On Saturday April 6th 1974, in the English coastal town of Brighton, a group known in their native Sweden but unknown to the rest of the world won the Eurovision Song Contest with a song entitled 'Waterloo'. ABBA had arrived and the rest is not merely history but the stuff of legend. To date, ABBA has sold over 350 million records worldwide.

Following their Eurovision triumph, Agnetha Fältskog, Benny Andersson, Björn Ulvaeus and Anni-Frid Lyngstad (the initials of their first names made the name ABBA) were catapulted onto the world stage. 'Waterloo' topped pop charts all around the globe. 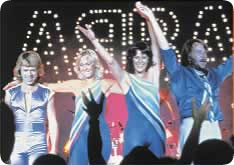 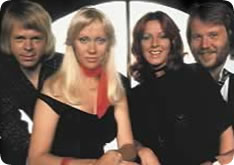 Over the next eight years, ABBA would achieve countless hit singles, platinum albums, sell-out concert tours and even a hit movie – ABBA – The Movie. The group's chart domination of Europe was unequivocal – with, at the time, only the Rolling Stones, Elvis Presley and the Beatles having achieved longer runs of Top 10 singles. Meanwhile, across the Atlantic, the American hits continued: ten songs made the Top 20 with 'Waterloo', 'Take a Chance on Me' and 'The Winner Takes It All' making the Top 10. 'Dancing Queen' took ABBA to number one. A truly global success, 'Dancing Queen' was also number one in twelve other countries.

Europe and North America were not the only continents to experience 'ABBAmania' – there were six consecutive number one singles in Australia and four number one albums (The Best of ABBA remains, to this day, the country's highest selling album). Their Melbourne concerts were legendary. There were six number ones in New Zealand with a further 12 singles reaching the Top 20. In Mexico, the group scored eleven Top 10 hit singles, with seven reaching number one, and six number one albums; and in Zimbabwe there were 13 Top 10 singles and no less than eight consecutive number one albums (excluding the compilations still on general release!). In Japan, 14 singles made the 'All Japan Pop 20' with 'Summer Night City', 'Chiquitita', 'Voulez-Vous' and 'Gimme! Gimme! Gimme!' all reaching number one. 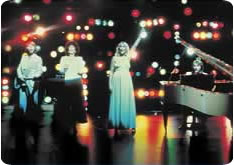 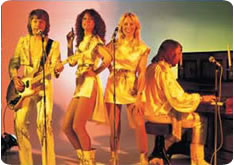 But by 1982 it was all over. Plans for another new album were abandoned and The Singles – The First Ten Years released in its place. The year ended with the release of the single 'Under Attack' which was the last for the group. Yet, despite the fact that ABBA ceased to record or tour together, their music continued to entertain, to enthral, to inspire. ABBA is very much a continuing success story. The countless hits have transcended time to remain as popular today as they were when first released, in some cases more so. ABBA Gold and More ABBA Gold remain best selling albums worldwide. The movies Muriel's Wedding and Priscilla, Queen of the Desert both featured ABBA's music and also won the group whole new generations of fans. The opening of MAMMA MIA! has not only seen theatre goers dancing in the aisles - reliving memories or discovering the ABBA sound for the first time - but also saw the album ABBA Gold back at number one in the UK charts within weeks of the show's London premiere.

The ABBA phenomenon is unstoppable and in 2010 ABBA was inducted into the Rock and Roll Hall of Fame.